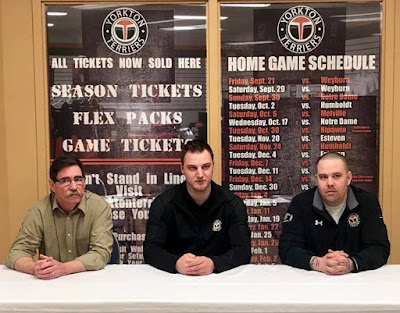 After advancing to the SJHL Semi-Final for the first time since 2014, Mat Hehr (pictured above middle) has earned himself a new contract.

The Yorkton Terriers and Hehr agreed to a new 2-year contract extension plus an option for 2021-22 season.

The Terriers' said in their press release that Hehr successfully changed the culture in the dressing room to promote a more positive team experience and developed a strong, team first support staff that included a full scouting staff, assistant general manager, and role specific assistants.

Hehr and the Terriers improved on their win total from the previous year by 18 wins during the regular season to 31 this season, and knocked off the Notre Dame Hounds, the defending champion Nipawin Hawks before falling in Semi-Finals in 4 games to the Battlefords North Stars.