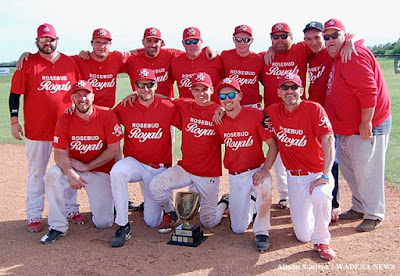 
After starting the season 0-3 the Rosebud Royals went on a sizzling 12-0-1 record to finish league play and to be crowned champions of the Richardson Pioneer Men’s Fastball League on July 1st in Wadena.  After two wins on Tuesday in the Pattison Agriculture Conference against the Junior Royals, and Foam Lake Merchants, the Rosebud Royals found themselves in the A-Final of the double-knockout playoff tournament against the Balcarres Broncs.  Balcarres won their two games in Western Cycle Conference Playoff against the Neudorf Posse and Rhein Rockets, in an extra inning.  The Royals defeated the Broncs, 3-1 in the A-Final to advance to the League Final Game.  The other teams that qualified for the Playoff Tournament with one win on Tuesday were the Rhein Rockets, Neudorf Posse, Rosebud Junior Royals, and Foam Lake Merchants.  On the B-Side, the Rhein Rockets defeated, the Junior Royals 9-0 thanks to Brett Peppler’s pitching a Shutout and hitting three homers.  Chad Sebulsky added solo shot.  The Neudorf Posse defeated the Foam Lake Merchants 9-3, and then lost a close battle 1-0 against the Rhein Rockets with Terry Peppler throwing a complete game shutout.  The B-Final saw a heated battle between the Rhein Rockets and Balcarres Broncs in a back and forth relatively high scoring affair early.  The Broncs came out on top 7-6 with Colby Davidson getting the win.

That Broncs win set up a rematch of the A-Final for the league title between the Original 6 team Rosebud Royals and Balcarres Broncs, 1st year in the league.  The Royals jumped on the base-paths early loading the bases in the first inning but pitcher Darian Belgarrde- Cote got out of the jam and ended up pitching five shutout innings.  On the Royals side James Holowaty also kept the Broncs bats at bay also pitching a shutout.  In the top of fifth the Broncs nearly scored the go-ahead run, with runners on 1st and 2nd, Royce Cote hit a line drive to left field.  The runner rounded second and Carson Scheschuk made the throw home just in time for catcher Scott Comfort to make the tag at home for the 3rd out.  The Royals failed to score in the bottom half leading to extra innings.  The International rule found the teams starting with runners on 2nd to start the inning. The Royals intentionally walked Craig Geisler, and made it more interesting throwing a pass ball letting the runners get to 2nd and 3rd.  Royals Pitcher James Holowaty pitched out of the jam with two strikeouts and a ground ball back to him to end the threat.  In the bottom half the Broncs walked Lance Holowaty with first base open, and Scott Comfort hit a grounder up the middle and reached on error loading the bases.  Royal’s veteran Darin Faubert hit a blooper over the second baseman’s head who made a nice diving catch for the out.  However, Royals player Joey Leach tagged up on the play and busted for home with the Broncs player on his back and reached home just in time to score the league clinching run.

The league showed its parity once again in the playoffs, with more than half the playoff games finishing with a one run difference. Rosebud Royals now join, Wynyard, and Stoney Creek on the League Championship Trophy.

Pitcher James Holowaty was awarded Playoff MVP for his 4 wins, and only allowing 1 run in 11 innings on July 1st.  Holowaty might have had some extra help watching over him in this season.  On April 16th, his father Mel passed away after a long battle with Cancer.  Mel was a former Royal, huge ball fan, and even caught for James when James was starting out as a teenager in men’s tournaments.  To start the season James put his dad’s initials on under his hat and dedicated the season to Mel.  Royals Catcher Scott Comfort, who has caught for Holowaty since the 1990’s, said "this playoff tournament was hands down the best he’s seen Holowaty pitch and he managed to keep it up for 11 full innings against one of he toughest lineups in the league.”  Holowaty dedicated the season to his father, and now has the league trophy, and MVP trophy to show for it.