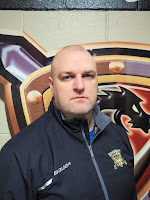 "We heard good things about him from Barry, which will put a lot of stock in and he's got lots of experience at the Junior A level in a small-market like ours plus he's got some great connections so he basically checked off all the boxes for us," Stampeders' President Pat Morden said in a phone interview this morning (Mon).

The 38 year old Grimwood takes over Barry Wolff who stepped down after one season with the Stamps to become the Head Coach/GM of the Merritt Centennials and he says he's looking for to the new opportunity.

"I've heard nothing but good things about the programs and town & what's in place with the staff, board, sponsorship and fans so I wanted to go to a place where I was working with and for good people and I think I've found that."

Before that he spent 3 seasons (2015-18) with the Kindersley Klippers (SJHL) as their Head Coach and GM and also spent time as Asst. Coach with the Powell River Kings (BCHL) and the WHL's Victoria Royals.

The Stamps are coming off one of their most successful seasons in franchise history and with the position open, Morden says there was lots of interest,

"We had well over 20 candidates in for the job and about half-dozen or so that were very good and got strong consideration but in the end we were looking for someone who was committed to be here long-term and we're glad that was Geoff was."

Grimwood and his staff will now get ready for their first duties together getting ready for the Manitoba Junior Hockey League Annual General Meeting on June 7th and 8th, with the 2019 MJHL Draft happening on Sunday June 9th.