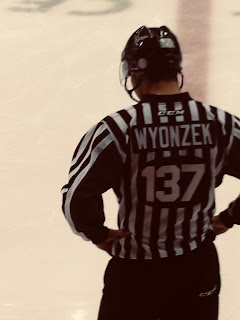 When you think of one of the top hockey officials in Saskatchewan, you don't have to look much further than someone from right in our own backyard.

For Yorkton's Tarrington Wyonzek, he traded in his stick for a whistle, and his players jersey for a striped jersey with the same dream in place of one day making the National Hockey League.

Wyonzek played his minor hockey in the Yorkton area and like any other young player with the hopes of one day making the big leagues but as his childhood continued another interest came up.

"I knew I wasn't a good enough hockey player to advance on as I just did it for fun and then starting officiating more seriously and got pushed along by the likes of Garry Gawryliuk, Jeff Bahrey and Marc Dubreuil and they kept pushing me and helped me get my foot in the door so to speak," Wyonzek said.

Ever since then his on-ice officiating career has took off each and every year with him doing around  150-160 games in the Midget AAA, Junior, Senior and Pro ranks (AHL) on average per season.

Like there is for any referee, there has been some highlights for Wyonzek during his career.

"This year has been pretty exciting for me just getting to do Game 7 of the WHL Final on Monday, and then I got the chance to go to Sweden last month for IIHF U-18 Hockey championships was an outstanding experience and then getting the chance to chance work last years' Memorial Cup in Regina in home city and that was big honour, and I've got to watch some great hockey the past couple years."

For Wyonzek he's always looking to get better and advance on his career, and just a couple years back signed a contract with the American Hockey League (AHL), which is that one step closer to his ultimate dream.

"At the end of the day every official in Major Junior and pro hockey, their goal is to get to the top level just like the players so yep that would be the main goal for me."

The next assignment for Wyonzek will be to head east to Halifax, Nova Scotia to work as a linesman for the 101st Memorial Cup.


Full Chat with Wyonzek below: