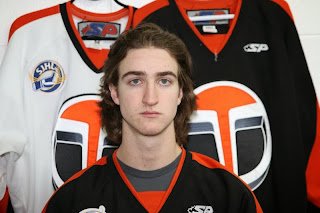 The Yorkton Terriers were able to snap their modest 3 game winless streak as they hammered the Notre Dame Hounds 6-0 on Tuesday night at the FAA.

The scoring would begin 10:58 into period number 1 as the newest Terrier Brett Boehm (pictured above) would make his way into the middle of the slot and ripped it by Brett Soles on the blocker side for his 2nd as a Terrier and 12th of the season to give the Terriers a 1-0 lead after 20 minutes of play.

The home team would get off to a quick start once again as just a modest 42 seconds into the 3rd period Boehm would get his 2nd of the night and 13th of the season to push the Terriers lead to 5-0. The Terriers for good measure would add their final marker as McMullen would get his 2nd goal of the evening to make it a 6-0 Terriers victory.

Kale Thomson stopped 25 shots for his 5th shutout of the season while the Hounds' Brett Soles stopped 25 of 31 in a losing cause.

The Terriers' are now into their Christmas break as their next action will be on December 30th when they visit their Highway 10 rivals the Melville Millionaires. 7:20/7:30 on GX94 from the HCUC in Melville with Yorkton Dodge Junior Hockey.