Mils start roady with a wild win in La Ronge 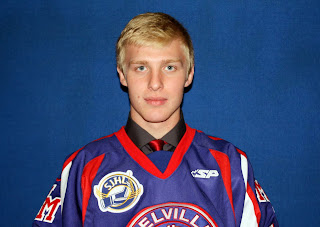 The Melville Millionaires won their 4th game in a row as they came all the way back to defeat the La Ronge Ice Wolves 6-5 in overtime.

It wasn't the start the Mils were looking for as they were very sloppy and not into it in the 1st period and the Ice Wolves would convert on their opportunity as a couple of former Mils players Michael Sagen and Rhett Kehoe (SH) would give La Ronge a early 2-0 after 20 minutes of play.

Owen LaClare would give the Ice Wolves an early 3-0 lead just 45 seconds into period number 2 with his 13th goal. But just 45 seconds later Tyson Predinchuk (pictured above)  would get his 12th of the season and 1st of 3 on the night to make it once again a 2 goal hockey game. But La Ronge would come back with 2 more of their own off the sticks of LaClare and Cole Golka to give the Ice Wolves a commanding 5-1 lead. But the Mils would begin to get their legs under the name and start skating and they would be awarded as Matt Carr & Joseph Sutherland would both notch their 1st SJHL goals to cut the Mils deficit to only 5-3 after 2 periods.

Mils continue their strong play into the extra frame, and with just 19 seconds remaining Colin Mospanchuk would bounce a puck in from behind the goal line of a Ice Wolves' dman skate and past Tyler Fuhr to give the Mils 6-5 overtime victory.

Isaiah Plett stopped 26 of 31 shots for the win while Tyler Fuhr turned aside 31 of 37 in a losing cause.

The Mils will finish off the 2 game roady on Friday (tonight) when they travel to the Whitney forum to take on the Flin Flon Bombers. Pregame 7:20, pxp at 7:30 on GX94