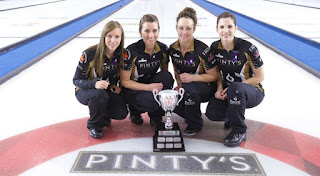 
The number 1 team in the world kept their red- hot season going in the Parkland area.

Ottawa's Rachel Homan and her rink of Emma Miskew,  Joanne Courtney and Lisa Weagle capture their 3rd straight Grand Slam of Curling title with a 8-7 win over Jennifer Jones of Winnipeg in the final of the Meridian Canadian Open at the Gallagher Center.

Both teams came out firing early as both teams would exchange a couple of 3's in the opening few ends as Jones took an earl 5-3 lead. Homan would come back with one in the 4th to bring it within 1 at 5-4.

Jones attempted to put some heat on Homan in the 8th but with her last she wrecked giving Homan a couple to give the Ottawa skip a 8-7 win on Sunday afternoon.

Homan chatted about the victory with reporters after. In the Men's final,

Toronto's John Epping won his 3rd career Grand Slam title but first with his new team as he defeated defending champion Brad Gushue 7-4 in the championship final at the Gallagher Center.

After forcing Brad Gushue into a single point in the 1st,  John Epping made another beauty raise with last to score a couple points to take a one point lead at 2-1 after 2 ends.

Gushue would draw for another single in the 3rd before Epping with yet another beautiful angle raise to grab another 2 points to head into the 4th end break with a 4-2 lead.

Epping, after yet another force in the 5th, makes a nice double to score 3 in end number 6 to take a 7-3 lead.

Gushue wouldn't be able to complete the comeback in 2015 as would score one in 7th but thats as close as he would get.


Epping spoke to the media after the win.


To recap the event, I chatted with Co-Chair Gerry Adam below: