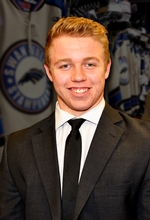 Brandon Clark and Cody Ellingson (pictured above) each had 1G 1A while Captain Gavin Froese had the game winner as the Swan Valley Stampeders moved into 6th place with a 4-3 win on the road over the Neepawa Natives on Sunday at the Yellowhead Center.

Peter Matthews had the other goal for Swan while Zach Degraves made 22 saves for the win in goal.

The Stamps next action is tomorrow night (Tues) when they visit the Virden Oil Capitals. GX94 will broadcast the game with Yorkton Dodge Junior Hockey, pregame 7:20 pxp at 7:30 from Tundra Oil & Gas Place.

17 year old Ty Enns scored his team leading 12th goal of the season but the Waywayseecappo Wolverines dropped their 5th straight game, 4-1 to the Winnipeg Blues at the MTS Iceplex

Greg Harney made 31 saves in the losing cause.

The Wolverines return to action on Wednesday night at 7:30 when they visit the Neepawa Natives.


In the Saskatchewan Junior Hockey League,

The Yorkton Terriers wrapped their 3 games in 3 night road trip with another 1 goal loss dropping a 3-2 decision yesterday (Sun) to the Melfort Mustangs.

The Welke Twins, Mackenzie and Carson scored for the Terriers while Jakob Severson stopped 32/35 in the losing cause.

The Terriers will return to home ice for the first time in quite awhile on Friday night when they host the Notre Dame Hounds at 7:30 from the FAA.