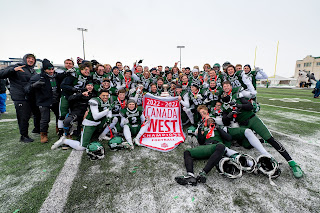 
The Saskatchewan Huskies are the winners of the 2022 Hardy Cup for the 2nd straight year.

The Huskies captured their 21st career conference title with a 23-8 win over the UBC Thunderbirds at Griffiths Stadium in Saskatoon.

"It's pretty special, just to do it for a 2nd straight year is nice, but we are now just another step closer to our ultimate goal of a Vanier Cup," said Melville product & Huskies defensive back John Stoll, who had 3.5 tacklers & 1 tackle for a loss in the game.

The Huskies led 9-7 at half before quarterback Mason Nyhus found Yorkton's Jordin Rusnack for a 8 yard major on the final play of their third quarter and they were breeze on from there.

With the win, the Huskies now advance to this Saturday's Uteck Bowl — a national semifinal that will be held in Antigonish, N.S. against the AUS Champion St. Francis Xavier X-Men.

"They got a really good running back in #27, so we got to make sure defensively we are aware of him and make sure we do a good job of slowing him down and if we play our game on all phases we will have some good success."