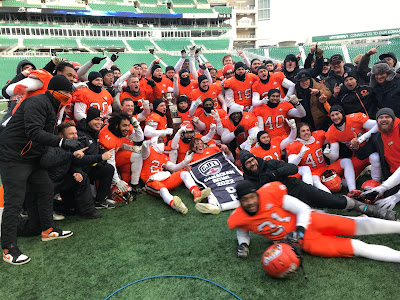 For the first time in 22 years, the Okanagan Sun are CJFL's Canadian Bowl winners.
The Sun captured the National title on Saturday afternoon defeating the hometown Regina Thunder 21-19 at Mosaic Stadium.

"It feels great, you know we put it a lot of work in this season and the previous offseason & just to see the hardwork payoff is surreal", said Sun receiver and Yorkton product Noah Bymak.

The Thunder led 14-0 in the 2nd quarter then at one point 17-7 in the 3rd quarter before Sun stormed back with a big 2nd half surge.

Bymak, who hauled in 3 balls for 16 yards in the title game says to win it at home was pretty special.

"Oh absolutely, just to see so many familiar faces in the crowd from my family to friends to former coaches, it was a pretty special feeling."