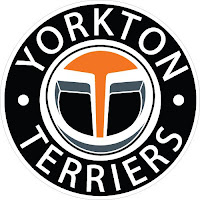 The Yorkton Terriers announced they've made a couple of roster moves on Tuesday.

The Terriers' announced they've signed 2004-born netminder Tysen Smith.
Smith, a Prince George BC product split time this past season with the AJHL's Spruce Grove Saints and KIJHL's 100 Mile House Wranglers.
In 4 games with the Saints, he had a 2-1 record with a 2.76GAA and a 0.883 SV%.

In a corresponding moves, the Terriers dealt 18 year old goalie Tommy Bouchard to the Joliette Predateurs (QJHL) for a player development fee.