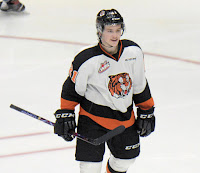 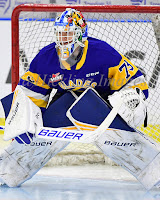 Yorkton products Nolan Maier and Brett Kemp have been named to respective division All-Star teams from the abbreviated 2021 WHL season
Maier of the Saskatoon Blades,  finished fifth among WHL goaltenders in wins, posting a 12-3-1-1 record in 17 games to go along with a 2.34 goals-against average and 0.915 save percentage.


Kemp recorded 31 points (12G-19A) in 23 games and paced the Tigers offence leading the club in scoring.


For a full look at the WHL's All-Star team go online to www.whl.ca
Posted by Benny W at 09:39