The Yorkton Terriers rebounded from a Friday night loss to the Melville Millionaires to defeat the Mils last night 3-0 last night.
Daylan Gatzke, Corwin Stevely and Devin Nemes scored for the Terriers while Dawson MacAuley stopped all 26 shots he faced for his 2nd shutout of the season.
Troy Trombley made 33 saves in the losing cause.
The Terriers next action will be on Friday night when they visit Nipawin. GX94 will broadcast the game with Yorkton Dodge Junior Hockey, Pregame 7:20.
The Mils will be in action on Tuesday when they start a 2 game roady in Battlefords. Pregame show 7:20, PxP at 7:30 on GX94.
--------
Over in the MJHL,
The Wayway Wolverines started off their road trip on the wrong foot as they dropped a 7-3 decision to the Steinbach Pistons.
Robert Briem chipped in with all 3 markers for the Wolverines while both net minders played for Wayway, Mitch Wiebe made 11 saves on 15 shots & Brandon Holtby had 16 saves on 19 shots.
The Wolverines will finish their roady tonight in Selkirk.
Posted by Benny W at 10:02 No comments:

The Melville Millionaires snapped their 3 game losing streak as for the 3rd time this season they defeated their Highway 10 rivals, the Yorkton Terriers 3-1.

It was good pace to the 1st period for both sides, as both times had their fair share of chances early on, but both Matt Kustra and Troy Trombley were solid in their respective nets. The Mils would get on the board with only 34 seconds left in the 1st as captain Allen Kilback would send one on net that snuck through the Terrier goal for his 8th goal of the season to give the Mils a 1-0 lead after 20 minutes.


In the 2nd it was once again a back and forth start to the period, until the Mils killed a Terrier penalty that some very good chances on it, then shortly after it expired Landon Farrell (pictured above) showed his good speed and cut to the middle & jammed it through Kustra for his 8th of the year to give the Mils a 2 goals after 2 periods.


In the 3rd, the Terriers would cut the Mils lead in half just 8:17 into the 3rd frame when Carson Cayer would bang home a rebound in front into the open cage for his 1st SJHL goal to give the Terriers some life at a 2-1 deficit. But Reed Murray would put the icing on the cake with just 3:21 remaining when Reed Murray would beat Kustra high glove side for his 6th, to give the Mils a 3-1 home victory on Friday night.


Troy Trombley rebounded from the loss on Tuesday, to stop 25 shots in the win while Matt Kustra made 28 saves in the losing cause.


The two teams will go right back at it on Saturday night at the Farrell Agencies Arena at 7:30.


The selection camp roster for Team Canada West for the 2014 World Junior A Challenge taking place in late December in Kindersley has been set.

Russell MB product and Wayway Wolverines forward Rylee Zimmer and Swan Valley Stampeders' Tristen Mullin were among the 36 forwards named to the squad.

Zimmer has played 12 games since returning from the WHL's Regina Pats and has 3 goals and 15 points with the Wolverines this season.

Mullin, from Cartwright MB was acquired in the summer by the Stamps from the Dauphin Kings and is currently Swan Valley's top scorer with 9 goals, 13 assists for 22 point in 28 games this season.

The selection camp will take place Dec. 7th-10th in Calgary, AB while tournament runs from December 14th-20th in Kindersley.

Chat with Stamps' Tristen Mullin below. 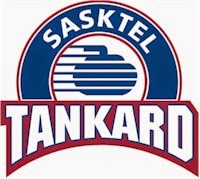 The 2015 Sasktel Provincial Men's Tankard Committee in Melville is having Volunteer Blitz Night tonight (Thurs) at the Melville Curling Club. Chili & a beverage will be sold for only $5 from 5PM to 9pm and afterwards you can register to volunteer for a variety jobs including ticket selling, security, Bartending and much more. Also Tankard event passes can be purchased at Melville Chevrolet GMC, Royal Drug Mart, Pharmasave, House of Hair and Horizon Credit Union. The event takes place Feb. 4th-8th in Melville.
Posted by Benny W at 09:20 No comments: