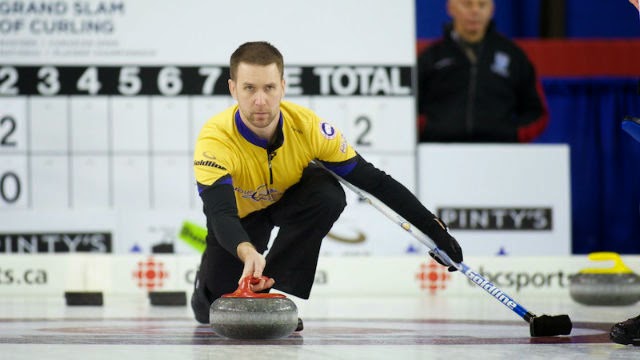 Local product Steve Laycock and his Saskatoon rink of Kirk Muyres, Colton Flasch and Dallan Muyres came up a little bit in their bid to capture their 1st Grand Slam title as New Foundland's Brad Gushue (pictured) scored 2 in the final end to beat Laycock 6-5 in the Canadian Open Final yesterday from the Gallagher Center in Yorkton.

The teams would exchange deuces in the opening 2 ends as hometown product Steve Laycock would make a nice soft weight double to score his deuce to take an early 2-0 lead after end number 1, while the 2006 Olympic champion Brad Gushue would come back with a deuce of his own in the 2nd, with a open hit to make the score 2-all after a couple ends.

Laycock would need full 8-foot with his last in the 3rd end, and he would make no mistake to regain his lead this time at 3-2. In the 4th, there was plenty of granite in front of the house and Laycock with his last made a nice come around to bite top 4, and all Gushue could do with his final stone was make a soft hit through a tight port to cut the steal of Laycock to only 1, to give the Saskatchewan rink a 4-2 advantage heading into the 4th end break.

After Laycock came up a little bit short with his corner freeze attempt, Gushue, the 2014 Masters grand slam champion, made his draw to four foot for 2, to once again even things up at 4-4.

After a Laycock blank in the 6th, Brad Gushue made a nice come around with his last to force Laycock to a single point and a 5-4 after 7.

In the 8th, in an end that started off not that ideal for Gushue, was bailed out a nice raise with his 1st to lie one. Laycock would counter with his final stone, with a nice freeze. But Gushue who only could see a couple inches of the button with his last would make the clutch draw and score 2 to come back and defeat Laycock 6-5.