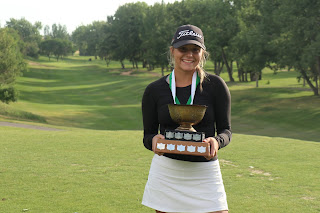 Yorkton’s Ella Kozak fired a final round 77, to claim a one-shot victory over Regina’s Autumn Neizsner, at the Saskatchewan Women’s Amateur Golf Championship, in Swift Current.

The 15 year old Kozak who golfs out of the Deer Park Municipal Golf Course finished the event at +13, and will now advance to the Canadian Amateur Women’s Championship in Spruce Grove, Alberta from July 27 – 29.

The Men’s Mid-Amateur also wrapped up yesterday in Speedy Creek, and Fort Qu’Appelle’s Sarain Lafond finished 49th, with a three-round total of 273.

And heading into today’s (Fri) final round of the Men’s Amateur Championship in Swift, Yorkton’s Kade Johnson sits fourth, after firing a two-under 70 yesterday, leaving him seven-under through three rounds, 13 strokes back of the leader.

And Theoren West, of Golf Kenosee is tied for 15th, at two-over through three rounds.