Another successful Football Night in Saskatchewan takes place in Yorkton 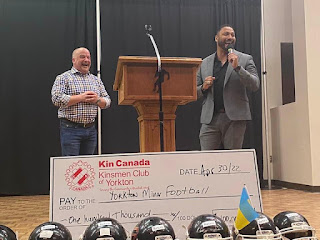 Football Night in Saskatchewan, the annual fundraising banquet, in support of Yorkton Minor Football made its return with a full house on Saturday night, following a two year hiatus, due to the COVID-19 pandemic.

"It was just nice to see everyone again, and be able to host the event after the couple year absence, this is our major fundraiser of the year to cover the expenses for our Yorkton Minor Football operations and just can't enough for the support from our community," said Yorkton Minor Football President Roby Sharpe.

Guest speakers included former CFL player J.R. LaRose, along with Langenburg's Noah Zerr and Yorkton's Peter Kozushka, who are both expected to be selected in tomorrow's (TUES) CFL Draft.

The evening also featured the announcement of a $100,000 donation from the Yorkton Kinsmen Club, for new lights at Kinsmen Century Field.

"It's just fantastic, Yorkton Kinsmen and has always been a big supporter of local minor football and with his donation it shows that, and even with the other business that are graciously going to help out is just awesome and we can't wait play under the lights even more in the future."

The new lights are expected to be ready in time for the upcoming fall football season, with Yorkton Concrete, Potzus Construction, R.H. Electric and Triple-A Directional Drilling donating their time and labour to help complete the project.

Sharpe adds the lights is the next possible step to bringing a Junior football to the community in the near future.