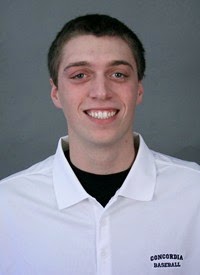 
After the defending WMBL champion Melville Millionaires started 0-3, they have won their last 3 games which included a 4-0 win over their Highway 10 rivals, the Yorkton Cardinals in a game cut short by rain that only lasted 5 innings.

The teams would exchange chances in the first 3 innings of the ball game with the Mils having the better chances, but they left 2 runners in scoring position in 2 of those first 3 innings.

It was until the 4th inning til the Mils broke out as Jake Collins (single), and Garrett Gaines (Hit By pitch) would both get on with no body out, then Andi Jacobi would move them to 2nd and 3rd respectively on a successful sacrifice bunt before Dalton Lovell, and Tyler Enns would rip RBI singles, Nick Walker would get his own RBI on a sac fly and then the Mils would get their final run of the ball game as Matt Mastantuono would lay down a successful squeeze play to give the Mils a 4-0 lead.

The two teams would get about another full inning in and that's all before the skies would open and rain would fall to wash away the rest of this 3rd meeting between these two teams.

Blake Evetts (pictured above) was sensational on the mound going 5 shutout innings, allowing just 2 hits and striking out 7 to improve to 1-1 on the WMBL season, while Clay Rideout would also go 5 innings giving up 4 runs (3 earned)  on 7 hits, walking 2 and striking out 3 to drop his record to 1-1.

The Mils will have the day off Monday before visiting the Regina Red Sox at Currie Field, while for the Cards they will have a couple of days off before travelling down the Highway 10 to Melville for the 4th of 10 meetings between these two team 7:05 First pitch from Pirie Field.
Posted by Benny W at 20:56