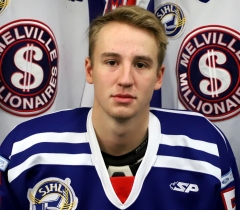 The Melville Millionaires earned their 2nd straight win on Friday night as they came back to defeat the Weyburn Red Wings 4-3 at Crescent Point Place.

The Mils got off to quick start as Jaydon Dureau grabbed a loose puck in the slot and shoved it past Joseph Young for his 2nd of the season just over 5 minutes in to make it 1-0.

Jonathan Krahn increased the Mils lead to 2-0 as he went five-hole on Young for his 4th goal of the season to give the visitors the two goal lead after 1 period.

In the 2nd, the Red Wings' would grab just 4:26 into the middle frame as Brock Wallace walked in from the left point and beat a screened Alexis Giroux for his 1st as a Red Wing to cut the Mils' lead to just one after 40 minutes.

The home team got off to a hot start in the third as Spencer McHardy drew the Red Wings even and then just 71 seconds later, Graham Skinner's shot squeaked in short-side on Giroux to give Weyburn their first lead at 3-2.

But with 5:25 to play, the Mils would tie things up as Reece Newkirk (pictured above)  found Jaydon Dureau back-door on the powerplay for his 3rd of the season to make it 3-3.

Then while short-handed 2 on 1, Dureau returned the favour sliding it over to Newkirk who went back-hand to forehead by Rylan Labrie, who relieved a injured Joseph Young, for the game winner with just 32 seconds left in regulation.

Mils netminder Alexis Giroux made 19 saves on 22 shots to earn his 1st SJHL win while Joseph Young got the start for Weyburn making 30 saves on 33 shots while Rylan Labrie allowed one goal on 4 shots in relief.

The Mils will look to improve their record to 3-1 on the season when they host the Weyburn Red Wings for the back-end of the home and home series at the Horizon Credit Union Center and puck drop is at 7:30PM

*(There's still a few more tickets left and they'll be made available on first come, first serve basis starting at 6:30PM at a cost of $15)

Elsewhere in the SJHL on Friday: