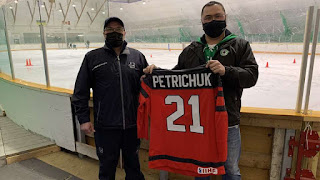 Balcarres' product Chris Petrichuk has received the recognition of a Hockey Canada Champion.

"It's pretty overwhelming actually, but it's not about the individual accomplishment as there's a lot of a other people that were involved that helped out", Petrichuk said in an interview with GX94.

Petrichuk, was acknowledged for the accomplishment because of his hard-work in the hockey circles in Balcarres, and for his great effort to establish and develop the Balcarres Barracuda female hockey program in the town and helping resurrect the Parkland Fire U18 AA program in Melville.
"The girls around our area didn't really have anywhere else to play, and with the hard-work it came together and took off quickly from there."

If you want to check out the video that shows the accomplishments of Hockey Canada Champion Chris Petrichuk, we have it up on our GX94 Facebook page.