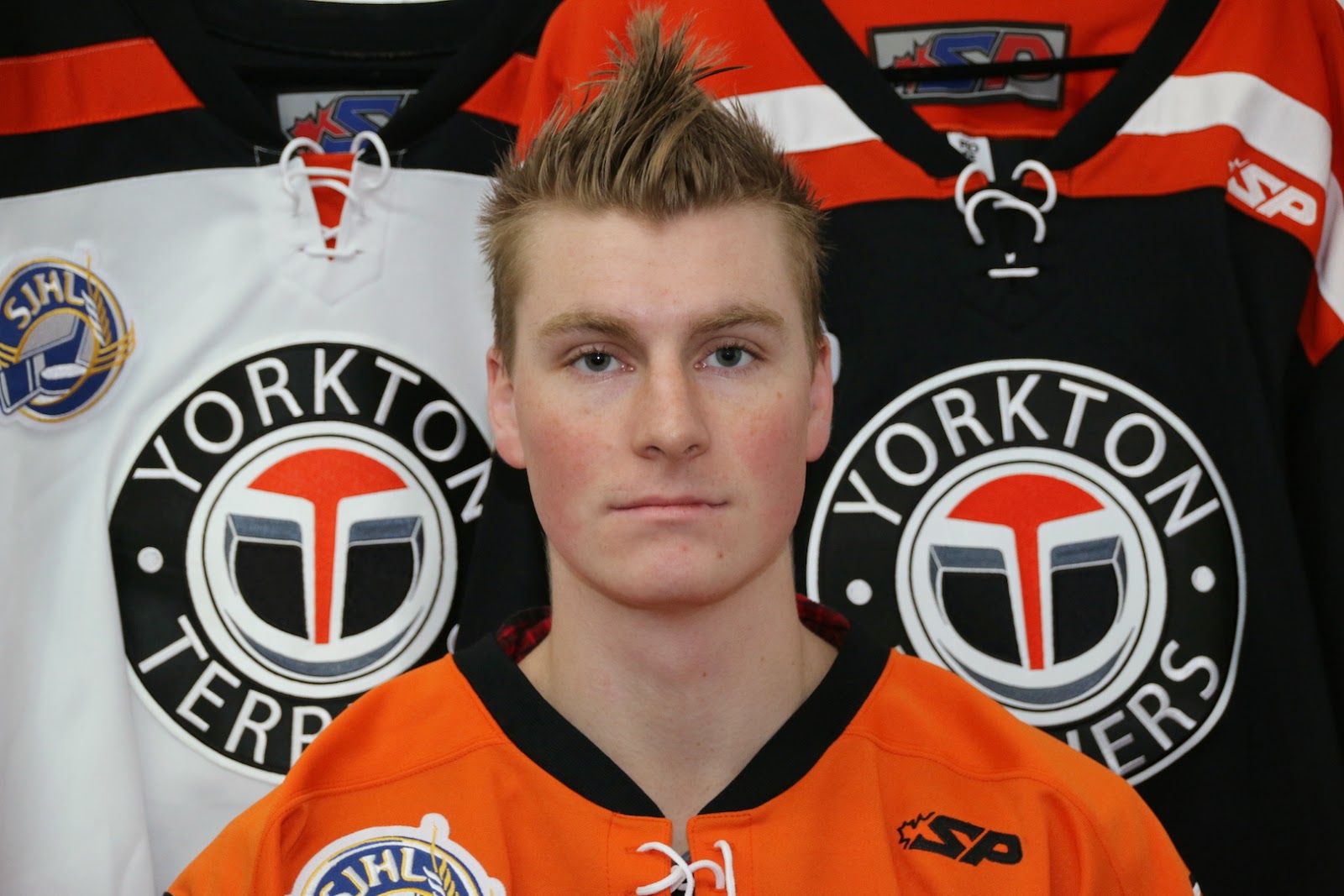 The Yorkton Terriers for the first time in 4 games fall in defeat to Weyburn as they dropped a 4-3 decision against the Red Wings on Tuesday night.

The Terriers would start off the game like they have done for most of this season by getting the first goal as the reigning SJHL Rookie of the Year Brandon Sookro would open the scoring with his team leading 8th goal to give the Terriers an early 1-0 lead. But before the 1st period buzzer would sound, the Red Wings would get the equalizer as Aidan Teilborg would tie things up at 1-1 after 20 minutes.

In the 2nd, the Red Wings would get an early powerplay and they would convert as Tucker Neuberger would bang home his 3rd of the season to give the home team their first lead at 2-1. But the Terriers wouldn't back down as they storm back with 2 unanswered goals (one even strength, the other on the PP) while both came off the stick of Kurt Johnas (pictured above) his 5th & 6th goal of the season to regain the Terriers' one goal lead at 3-2.  Weyburn would once again find away to get the equalizer after some sloppy defensive zone play, the Wings would leave alone Wings' Captain Josh Lees would slip his 10th goal of the season through Dawson MacAuley to knot things up at 3-3 after 2 periods.

The third period would start off with some good work on the penalty kill as the Terrier were penalized for 6 minutes in the opening 7 minutes of the period but their best penalty killer, their goalie Dawson MacAuley sharp in that span. The lone goal of the final frame would be th  eventual game winner as big Ian Parker would be left alone in the slot area and make no mistake snapping it home to push the Red Wings to a 4-3 home victory.

Nick Malvin started for the Wings but was pulled after giving up 3 goals on 21 shots, while Jack Burgart stopped all 13 shots he faced in relief. In the Terrier crease, Dawson MacAuley was once again solid despite the loss making 25 saves.

The Terriers road trip will continue on Thursday night when they start a 3 game in 3 nights trip through Kindersley, Battlefords & Kindersley.

The Melville Millionaires also had their win streak snapped at 2 as they lost 2-1 on the road in Estevan.

Ben Mack had the lone goal for the Mils in the loss while in goal Troy Trombley made 28 saves.

The Mils next action will be on home ice on Friday when they host the Notre Dame Hounds at 7:30 from the Horizon Credit Union Center.
Posted by Benny W at 20:58