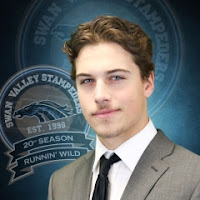 The Swan Valley Stampeders earned their 9th straight victory on Monday night after a 3-2 shootout win over the Waywayseecappo Wolverines.

Brian Harris (pictured above) would give the visitors a lead late in the 1st period as he would go fore-hand then back-end over top of Wolverines' goalie Isaac Labelle for his 13th of the season that gave the Stamps a 1-0 lead after 1 period.

In the 2nd, the Stampeders would add to their lead with 4:54 left in the middle frame and would be Swan River's own Carter Cockburn putting home his 3rd of the year to make it a two goal game. But just under 2 minutes later the Wolverines would respond as Michael Heitkamp's point shot would get re-directed home by Bryce Krater for his 8th to make it a one goal game after 40.

The Wolverines would draw even as the puck would take a big bounce off the end board and end up right on the stick of Wayway captain Jake Bestul who would then bury his 6th to make it a 2-2 game.

Overtime would solve nothing and then in the shootout it would Trent Halfdanson striking first for the Wolverines, but Alex Uryga would quickly respond to tie things up before Brian Harris would get the winner in the 5th round to give the Stamps the extra point.

Stampeders' netminder Merek Pipes turned aside 24 of 26 shots to earn his 19th victory of the season while Top Goalie & MVP nominee Isaac Labelle made 38 stops in the shootout loss for Wayway.

Swan Valley remain 4 points back of Portage for top spot in the standings and will look to push their winning streak to double digits on Wednesday night for their next game when they host the OCN Blizzars (Also it'll be Minor Hockey Night, it's $2 admission for all Minor hockey players who are wearing their jersey and there will be autograph session with the Stamps after the game in the lobby)

Meanwhile with the point, the Wolverines remain 4 points up on Winkler for the 8th and final playoff spot in the MJHL standings and they'll return to action on Wednesday as well when they host the Dauphin Kings.