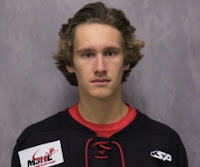 Rookie netminder Nathan Reay turned aside 41 shots for his 1st career MJHL shutout to lead the Waywayseecappo Wolverines to a 1-0 victory over the Steinbach Piston on Sunday night.

Greg Lee's 12th goal of the season, 13:39 into the 1st period stood up to be the game winner for the Wolverines.

Matt Radomsky made 15 saves on 16 shots in the loss for Steinbach.

The Wolverines' now sit at 59 points, and sit just 1 point back of Dauphin for 7th place overall and they will return to action on Tuesday night when they host the Winnipeg Blues.

The Swan Valley Stampeders and Selkirk Steelers completed their game that was delayed from October due to ice problems and it was the home team coming out on top.

The Steelers handed the Stampeders their 3rd straight loss defeating them 5-4 on Sunday.

Carter Barley and Noah Basarab scored two quick goals when the game resumed for the Steelers while Alex Uryga added his 14th late for the Stamps.

Portage 5 Winkler 1
(The Terriers with the win, clinches them first place overall)
Posted by Benny W at 05:19