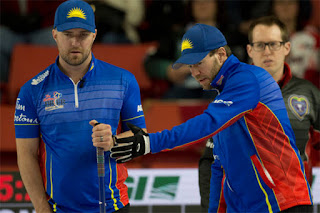 This will be the 10th appearance at the Tim Hortons' Brier for Saltcoats'-born Steve Laycock (pictured above left), but he admits this appearance will look a whole lot different than the nine previous.

The 38 year old Laycock, who will be representing Team British Columbia once again this year at the event, says with the bubble format it's already looked a lot different since arriving in Calgary.

"Just when we arrived, we got our stuff from a vehicle and had to go straight to our rooms and usually you're able to mingle with some of your friends on other teams' but this year you can't do that."

With the cancellation of curling events and closure of curling clubs it has provided some struggles and obstacles for participating teams to prepare for their Brier experience and it's been no different for Laycock.

"Well most of our team is in BC, so they've had the chance for some individual practice for most of the time and for me I was able to get a little time in last month, so I believe I'm ready but its definitely not the way I've prepared for past Briers."

Another change for this years' Brier will be competing on the ice without fans and supporters in the stands due to the pandemic and for Laycock and his team, who will be coached this week by Yorkton's Gerry Adam, he adds it'll take time to adjust to that.

"We are usually a team that can feed off the crowd a bit, but you just have to embrace the environment that you are in and trust the process and I think we'll be good to go."

Laycock also echoes the comments of other fellow curlers by sending kudos to the entire Curling Canada organization and Alberta Health services to allow them to get the chance to compete for National championship during these times.

Steve Laycock and Team BC will open up their event on Saturday night at 7:30PM in Draw 4 against James Grattan and New Brunswick

Chat with Steve Laycock below:

Saskatchewan's Dunstone will curl out of local club in 2021 Brier 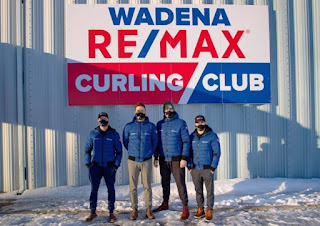 With most of the Curling clubs across Saskatchewan closed due to the pandemic, Matt Dunstone and his Saskatchewan rink were looking for somewhere to prepare for this weeks Tim Hortons' Brier.

That's when Wadena products Dustin Mikush and Scott Comfort stepped in and offered the Wadena RE/MAX curling club to host the Saskatchewan reps.

Dunstone and his rink of Braeden Moskowy, Kirk Muyres and Dustin Kidby were able to practice for a couple rinks in Wadena and with the isolation orders in place, they housed themselves in the community as well.

In exchange for the hospitality the town offered, the Saskatchewan rink will be curling out of the Wadena ReMax Curling club when they begin play at the Brier in Calgary tonight (Fri) against Team Nunavut.