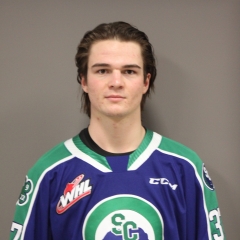 For local product Kaleb Bulych, he wasn't sure if he was going to be able to get back onto the ice to play his final year of junior hockey, but that'll change this weekend as the Western Hockey League's East division hub in Regina begins with games this weekend.
Bulych, whose a veteran of almost 250 career WHL games, says he's pretty fortunate to get the chance to get back onto the ice to play real games.
"There's just a lot that's left on the table for me, I put in a lot in during our extended off-season and I'm just taking things in perspective as lots of guys won't get the chance to play again this season so I'm just going to go out there and enjoy it."
Swift Current is in rebuilding mode, and will sport a pretty young roster coming into the Queen City hub, but the veteran defenceman has liked what he's seen from the bunch early on this year

"We are going to be a team that works hard, talent-wise it looks like lot better than last year, and we got some leadership here, so I think our hard-work will help us get those bounces this year."
One thing that's going to be different for the Broncos and the rest of the East division teams when they hit the ice for their 24 game schedule over the next couple months is going to be playing in front of a crowd-less Brandt Center in Regina.
"It's definitely going to be different, but you just have to be a team that creates your own energy, we seen with the NHL and their bubble that the teams that do that with a big hit or big play, has the most success."
Bulych whose hometown is Foam Lake, but played much of his minor hockey in Yorkton, will be playing alongside his brother Aiden with Broncos and they'll kick-off their abbreviated WHL schedule on Saturday afternoon at 4PM against the Saskatoon Blades.

Audio chat with Kaleb Bulych below: