Norrish Twins commit to be Tigers Next Season 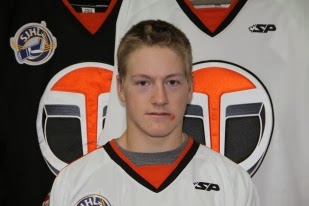 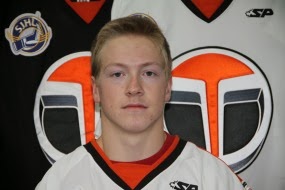 (From the Yorkton Terriers)


The Yorkton Terriers are very pleased to announce that twenty year-old defensemen Brady (pictured bottom) and Chase Norrish (pictured top) have committed to play Division I NCAA college hockey for the Rochester Institute of Technology (RIT) Tigers beginning in the fall of 2014. Located in Rochester, New York, RIT has an enrollment of over 18,000 students. The Tigers men’s hockey program plays in the Atlantic Hockey Conference at the NCAA Division I level. A relatively new program at the Division 1 level, RIT men’s hockey made the jump to from Division III to Division I in 2005. By 2010, the Tigers program grabbed national attention when they advanced to the NCAA Frozen Four tournament in Detroit, Michigan. Next season, the Tigers will be moving into a new 4,200 seat arena located on campus.
The exposure that the Norrish twins received at the recently completed SJHL Showcase in Warman certainly helped both young men to solidify their educational and hockey futures.
Prior to joining the Yorkton Terriers program, the Norrish brothers played one season with the Beardys Blackhawks of the Saskatchewan AAA Midget League. Both players were called up as Affiliate Players with the Terriers before making the move to Yorkton full time in the fall of 2011.
The Norrish brothers first season with the Terriers in 2011-12 saw both players post identical stats, playing in 56 games, scoring 6-goals and adding 11-assists. They also shared the Terriers Rookie of the Year award.
After logging key minutes and playing in all situations as rookies the Norrish’s really saw their game take off to a whole new level in the 2012-13 season and capped it off with an SJHL League Championship.  Before their second season with the Terriers, both players were named as Assistant Captains for the hockey club. In 54-regular season games Chase put up 7 goals to go along with 15 assists. He would also add 7 more assists in 17 playoff games. Chase was also recognized as the SJHL Defenseman of the Week on three different occasions while also being named the Terriers Unsung Hero for the season.
Brady’s second season with the Terriers was an exceptional one. He finished the regular season with 32 points in 52 games played. In 17-playoff games he added 11 points while sharing the SJHL playoff MVP. At the Western Canada Cup in Nanaimo, BC Brady was named as the tournament’s Top Defenseman. He was also named the SJHL Defenseman of the Week four separate times, the leagues Defenseman of the Month once and capped off a memorable 2012-13 season by being named the Yorkton Terriers MVP.
The entire Yorkton Terriers organization wishes to congratulate Brady and Chase on achieving their goal of advancing to play hockey at the NCAA Division I level and getting a quality education at a fine institution like RIT.
Below, Brady Norrish quickly chats about his commitment along with brother Chase to RIT
Posted by Benny W at 05:50