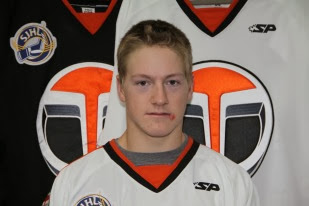 DEFENSEMAN OF THE WEEK: Chase Norrish, Yorkton Terriers
1993 D Chase Norrish (Strongfield SK) had three assists in three games played last week as the Terriers improved their regular season record to 6-and-3. He set up a pair of powerplay goals in Saturday’s road win over Melville. He also had an assist in Tuesday’s home win over Humboldt. For the season, he’s up to 2-goals and 6-assists in 9-games played. It was also announced last week that Chase and his twin brother Brady have accepted scholarships to RIT for next Fall (NCAA Div I).. 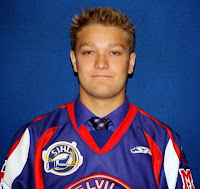 GOALTENDER OF THE WEEK: Isaiah Plett, Melville Millionaires1993 G Isaiah Plett (Steinbach MB) got his first taste of the Yorkton-Melville rivalry over the weekend and acquitted himself just fine as he led the Mils to securing three of a possible four points. On Friday, he made 34-saves on 35-shots to get the win on the road. The very next night, he stopped 27-of-30 as the Terriers were only able to beat him on the powerplay (all three goals with man advantage). He lowers his season totals to 2.94-GAA and .905-SPCT.