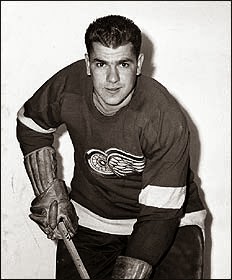 The Yorkton sporting and hockey world is in mourning after losing a legend as Metro Prystai has passed away at the age of 85 years old. The Yorkton native played more than 670 games over his 11 year NHL career that was played with 2 teams the Detroit Red Wings (2 stints), and the Chicago Blackhawks.

Prystai scored 151 goals and 179 assists over his NHL career that went from 1947-1958. Metro also was on 2 Stanley Cup winning Red Wings teams in 1952 & 1954. In '52, Metro scored the game winning goal in overtime and also added an assist to help the Wings to sweep the Montreal Canadiens and to defeat the defending Stanley Cup champion Toronto Maple Leafs.

This extremely talented Yorkton Saskatchewan boy left his humble beginnings to play junior hockey with the Moose Jaw Canucks in 1943. He became a sports icon in the community where they named him "Marvelous Metro". In his final season with Moose Jaw he got 32 goals and 39 assists in 22 games
(from metroprystai.com, a website developed by local author Frank Block who is almost complete a book about the hockey legend.)