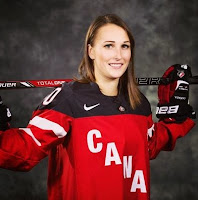 A mix of veterans and youth will represent Canada at the upcoming 2015 4 Nations Cup, taking place Nov. 4-8 in Sweden
.
The 22 players selected to Canada’s roster include two goaltenders, seven defencemen and 13 forwards and was chosen following Canada’s National Women’s Team Fall Festival from Sept. 13-20 in Calgary.

Canada’s roster will feature 13 returning gold medallists in including local product Jessica Campbell from its thrilling 3-2 victory over the United States at the 2014 4 Nations Cup in Kamloops B.C.

For the 20th time, the 4 Nations Cup will bring together four top women’s hockey countries in the world – Canada, Finland, Sweden and the United States.

Canada plays an exhibition game against Sweden on Nov. 1 and opens the tournament against Finland on Nov. 4
Posted by Benny W at 10:21