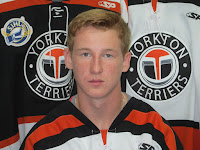 The SJHL Rookie Of The Week

Welke, who has two years of midget eligibility remaining, has made a smooth transition to the junior game and this past week, collected four assists in three games played.  He’s up to 2-goals and 9-assists in 13-games on the year, good enough to be second on the club in scoring.