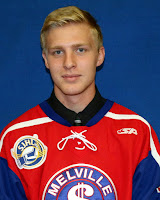 On the same day that the Melville Millionaires dealt their Captain Ben Mack to the Bonnyville Pontiacs, the Mils produced their biggest goal scoring game of the season.

The Mils won their 2nd straight after they hammered the Estevan Bruins 7-2 last night (Tues) at the Horizon Credit Union Center.

20 year old Tyson Predinchuk (pictured above) led the way for the Mils with 1G 3A, while Mitch Foyle had 2G 1A of his own. Ryan Rothenburger (in his Mils debut), Brett Kitt, Keegan Millgan and Quinton Greenwood also scored for the Mils who got 33 saves from goaltender Brandon Wells.

The Mils will be gunning for their 3rd straight win when they host the Notre Dame Hounds on Friday night at 7:30/

Carson Welke & Regan Seiferling had a goal and an assist each but it wasn't enough to push the Yorkton Terriers to a victory last night.

The Terriers fell at the Farrell Agencies Arena last night. 4-3 to the visiting Nipawin Hawks.

Jordan McCausland also scored for the Terriers, while Jakob Severson stopped 29/33 shots in a losing cause.

The Terriers return to action Friday as well when they host the Humboldt Broncos at 7:30 from the FAA.

Brandon Holtby was sensational stopping 42 shots but the Wayway Wolverines came up a goal short last night losing 5-4 to the OCN Blizzard.

Riley Shamray, Kevin Takatch, Alex Keena and Brayden Cullum each had a 1G 1A for the Wolverines.

The Wolverines will start a 2 game roady this weekend starting Friday with a date with the Winkler Flyers.
Posted by Benny W at 07:57