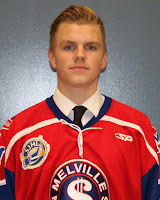 The Melville Millionaires were in a 3-1 deficit in the 3rd period but they used two short handed goals and the shootout winner from Mitch Foyle to help them win their 3rd game of the season, 4-3 in the shootout over the Flin Flon Bombers.

Former Bomber Dalton Menke and Dylan Ostertag had the short handed goals in the 3rd while Cole Filler opened the scoring for the Mils.

Brandon Wells (pictured above) improved to 3-2 on the season with Melville stopping 45 shots in the win.

The Mils next action will be on Tuesday night when they host the Estevan Bruins from the Horizon Credit Union Center at 7:30.

The Wayway Wolverines lost their 2nd straight decision on home ice, 6-0 to the Winnipeg Blues at the Wayway Arena Complex.

The Wolverines next game will be on Tuesday night when they visit the OCN Blizzard at 7PM MB time.
Posted by Benny W at 12:53