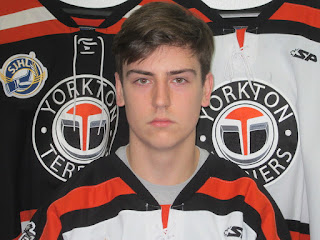 The Yorkton Terriers (4-7-0) erased an early 2-0 deficit by getting their 4th win of the season, 5-3 over the Notre Dame Hounds (4-3-1) on Wednesday night at the Duncan McNeil Arena.

The Hounds would draw first blood just 4:15 into the first as Peyton Hogan would get his 1st goal of the season to give the home team an early 1-0 lead. They would add to their lead and make it 2-0 just 3:09 later as Langenburg's Evan Werle would rip home his 3rd of the year. The Terriers who had a number of PP chances in the first frame and they would convert on the 4th chance as Shane Sherban (pictured above) would bang home the loose puck for the 3rd for the 17 year old to cut the Terrier deficit in half at 2-1 after 20 minutes.

In the 2nd it wouldn't take the Terriers long to even things up at 2-2 as Adam Santoro would slip home his 3rd of the season just 5:05 into the middle frame. The Terriers would take their first lead of the night at 15:54 of the 2nd period as Tyler Baier's long wrist shot would get through some traffic and into the back of the net for his 3rd in as many games to give the visitors a one goal lead at 3-2 after 2 periods.

The Hounds would even things up very early into period 3 as Gage Ramsey would finish off a nice passing play from Ian Williams for his 1st SJHL goal to tie things up at 3-3. But the Terriers would respond just 56 seconds later as Sherban would get his 2nd of the night and 4th of the year to make it 4-3 Terriers.  McKenze Welke wouldprovide some insurance deflecting home his 6th goal of the season to give the Terriers their 4th win of the season, 5-3 over the  Notre Dame Hounds.

Jakub Severson made his 4th straight start for the Terries & earned his 3rd win making 29 saves while Alexi Thibedeau stopped 35 shots in a losing cause.

The Terriers next action will be on Friday night when they host the Flin Flon Bombers at the FAA at 7:30.

Both of our local teams were losers in the Manitoba Junior Hockey League on Wednesday night.

In Swan River, Zach Degraves made 21 saves as the Swan Valley Stampeders dropped a 3-0 decision to the Virden Oil  Capitals.

Stamps next action will be on Friday when they host the Portage Terriers. Pregame show 7:20, PxP at 7:30 MB time on GX94 with Yorkton Dodge Junior hockey.

Meanwhile in Neepawa, the Wayway Wolverines dropped a 4-3 shootout to the Neepawa Natives.

The Wolverines will start a road trip on Friday vs. Selkirk.
Posted by Benny W at 19:50