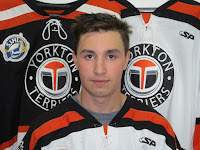 The Yorkton Terriers earned their first victory of the season yesterday as they kicked off their SJHL showcase event with a 3-1 win over the La Ronge Ice Wolves.

Brandon Sookro (pictured above) scored his team leading 6th goal of the season just 6:50 into the 3rd for the GWG. Reid Anderson and Paul Savage also scored for the Terriers.

The Terriers split their goaltending duties with Matt Kustra stopping 15 of 16 shots while Cam Pateman made 21 saves.

The Terriers will take on their Highway 10 rivals, the Melville Millionaires to wrap up the showcase today (Tues) at 12:30 at the Legends Arena in Warman.


The Melville Millionaires might've put together their best effort of the season, but they remained winless after dropping a 3-2 decision to the Nipawin Hawks.

Cole Filler and Liam Shaw scored for the Mils while 20 year old Josh Bykowski turned aside 32 shots in a losing cause.

As mentioned above, Mils battle the Yorkton Terriers coming up later today (Tues)
Posted by Benny W at 06:50