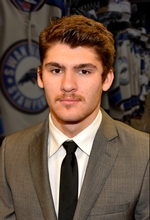 The Swan Valley Stampeders moved into a tie for 7th place in the MJHL standings after they doubled up the Wayway Wolverines 6-3 on Tuesday night.

The first period was mostly dominated by the home team as the Wolverines would be all over the Stamps and would record the only goal of the 1st as Derek Wood would take a nice feed in front from Ty Enns then slip it five-hole on Swan net minder Brett Evans to give his team a 1-0 lead after 1 period. Shots 12-3 Waywayseecappo.

The fortunes would change in the middle frame as the Stamps would score 3 goals in the opening 8:31 of the 2nd period off the sticks of Gavin Froese, Jesse Lawrence & Colton Brausen to give the Stamps a 3-1 lead. Kevin Takatch would pull the Wolverines back within 1 with 4th of the year to make it 3-2. Just 2:24 later local product Cody Ellingson would get his 2nd to make it 4-2. Froese would add his 2nd of the period in dying seconds of the period to make it a 5-2 Stamps lead after a couple periods.

Carter McMurdo would continue on the Stamps torrid scoring pace as he would notch his 1st MJHL goal in the early stages of the 3rd which would be set up Tristan Langan (pictured above) who had 5 assists on the night. Johl Swedlo would cut Wayway within 3 but that's as close as they would get as Swan won their 5th of the season, 6-3 over the Wayway Wolverines.

17 year old Brett Evans made 25 saves for the Stamps to get his 3rd win of the season while Greg Harney gave up 6 goals on 16 shots before he was relieved by Brandon Holtby who was perfect on the 5 shots he faced.

The two team will go right back it in the back half of their home and home on Wednesday in Swan River. Pregame 7:20, PxP at 7:30 with Yorkton Dodge Junior Hockey on GX94.