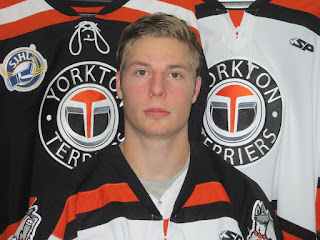 The Yorkton Terriers used a strong road effort to earn their 6th win of the season defeating the Estevan Bruins on Friday night 6-4.

The home team would get on the board first as just as their first PP expired Keegan Allison would bat home his 8th goal of the season to get them an early 1-0 lead. The Bruins would add another just a short time later at the 8:04 mark as Lyndon Pastachak would slip behind the Terrier D and would slip it five-hole on Terrier net minder Jakob Severson for his team leading 10th of the year to make it 2-0. But just 54 seconds later 19 year old Calgary product Jordan Evans (pictured above) would put home his 8th to cut the Terrier deficit to within 1 at 2-1 after 20 minutes. Shots 14-6 Bruins.

In the 2nd it would be the Terriers getting the early goal as Shane Sherban would cause a turnover at his own blueline and then go all the way to snipe home his 5th of the season to even things up at 2-2. Just 3:45 later the Terriers would grab their first lead of the night as McKenzie Welke would take a nice feed in front from Cole Keenleyside & slip home his 8th goal of his rookie season to make it 3-2 for the visitors. Yorkton would add another one late in the final minute as while short handed Jordan Evans would show tremendous burst of speed by splitting the Bruins D and then finishing off his 2nd of night and 9th of the season to give the Terrier a 4-2 lead after a couple periods. Shot after middle frame was 28-22 Terriers.

The Terriers would make it 5-2 early in the final frame as their top ranked power play would go to work as Reid Anderson's nice low shot would beat a screened Fuhr for his 3rd of the season to give the Terriers a 5-2 lead. But the Bruins would make things very interesting in the 3rd as Keegan Allison would grab his 2nd of the night with just under 7 minutes remaining to cut the Bruins within 2 at 5-3. With 49 seconds left Braden Oleksyn would pick up a loose puck from a scramble and would shelf it for his 8th to make it a 1 goal game at 5-4. But that's as close as they would get as Jordan McCausland would ice it into the empty net to give the Terriers their 2nd straight win, 6-4 over their Viterra division rivals.

Jakob Severson would put together another quality start making 35 saves for the win while Bruins goalie made 26 saves in the losing cause.

These two teams will go right back at it and play the back end of their home n home series on Saturday in a neutral site in Moosomin at 7:30.

In the Manitoba Junior Hockey League it was a big victory for the Swan Valley Stampeders as they snapped the Portage Terriers' 12 game winning streak with a 4-3 win on home ice on Friday in Swan River.

Josh Tripp, Josh Martin, Riley McKay and Tristan Langan scored for the Stamps while Zach Degraves made 30 saves for the win.