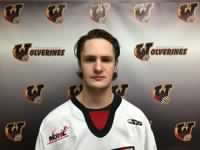 The Wayway Wolverines were able to get their 4th win of the season and snap their 6 game losing streak in the process as they slipped by the Swan Valley Stampeders 3-2 in the shootout on Wednesday night.

After getting off to a very slow start to their first period last night the Stamps would start off this game with a bang as just 1:14 into it Michael Fortin would bang home his 2nd of the season to give Swan an early 1-0 lead. But just 3:04 later, Wolverine captain Alex Keena's side angle shot would slip through Stamps' goalie Zach Degraves for his team leading 7th to tie things up at 1-1 after 40 minutes. Shots on goals 12-9 SV.

In the 2nd period, just a short time in Josh Tripp would get his 5th of the season for the Stamps to give the home team a 2-1 lead. But just 58 seconds later, the Wolverines would tie it up as Rivers product Brock Paddock would slap home his 2nd of the young MJHL season to even things up again at 2-2.

After a scoreless 3rd period and overtime the game would head to a shootout.

Brandon Holtby (pictured above) earned his 2nd win of the season making 33 saves in the win while Zach Degraves made 27 saves in the shootout loss.

The Stamps and Wolverines next action will both be against the Portage Terriers coming up this weekend as Swan hosts them on Friday with Wayway welcoming them on Saturday night.

The Melville Millionaires got snapped at 4 games as they dropped a 5-4 decision on the road against the Notre Dame Hounds on Wednesday night.

Christian Stevens led the way with 1G 2A while Brett Kitt had 2 points (1G 1A) and Quentin Greenwood and Tyler Kreklewich scored singles for the Mils.

Brandon Wells made 37 saves in the loss for the Moneymen.

The Mils will try and get back in the win column on Saturday night when they host the Humboldt Broncos at the Horizon Credit Union Center.
Posted by Benny W at 21:13