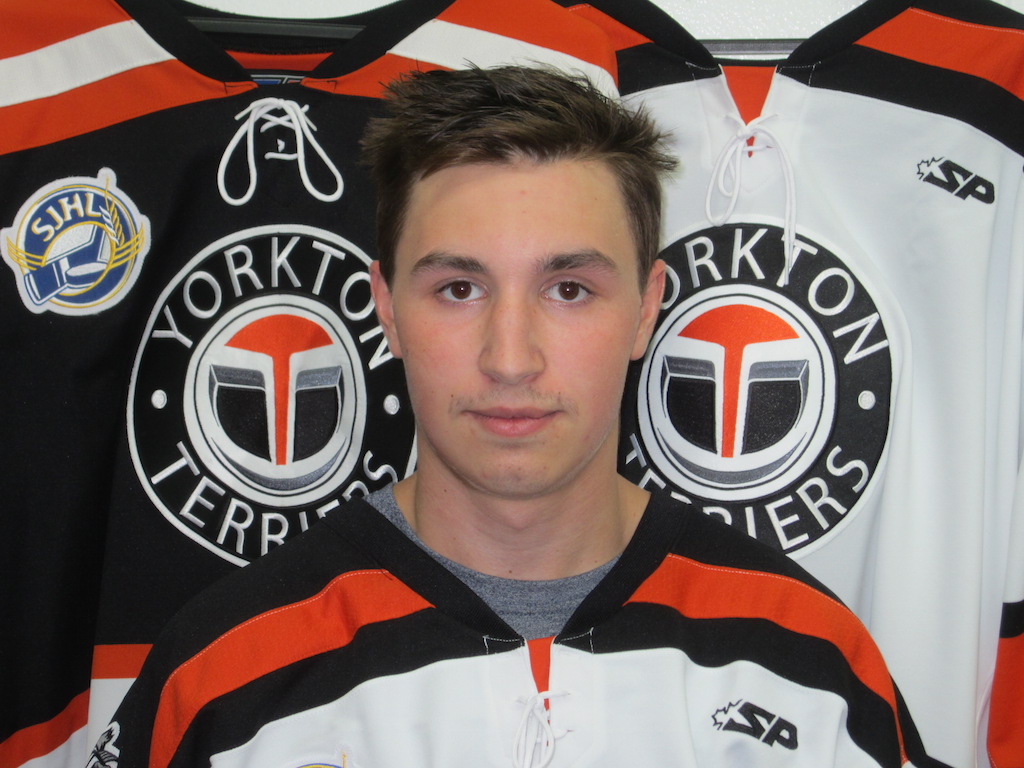 The Yorkton Terriers came back to win the 9th and final installment of the Highway 10 battle for the season beating the Melville Millionaires 3-2.

In the 1st, the Mils would provide the only offence as Cole Filler would start a nice rush and go top shelf on Matt Kustra for his 13th of the season to give the visitors a 1-0 lead after 20 minutes. Shots 11-7 Terriers in the 1st.

The Terriers would even it up at the 13:41 mark of the 2nd as Brandon Sookro (pictured above) would knock home his 24th of the season to make it 1-1. But just a short time later, the Mils would strike back as Liam Shaw would bang home his 13th of the year to regain the Mils their lead at 2-1. The Terriers would get a glorious chance to come back and tie it up again with a full 2 minute 5 on 3 powerplay and they would convert with their 2nd power play goal of the period as a big rebound would come out and Mackenzie Welke would help the Terriers tie it up with his 18th for the 16 year old to make it a 2-2 game after 2 periods. Shots on goal after 40 minutes was 22-14 Yorkton.

In the 3rd it would stay tied til just 3:57 remaining in regulation when  Sookro would send a backhand through Wells for his 2nd of the night & 25th of the season to give the Terriers a 3-2 win to push now 10 points ahead of the Mils for the final playoff spot in the SJHL.

Matt Kustra made 22 saves on 24 shots for the victory for the Terriers while Brandon Wells made 29 saves on 32 shots.

The Terriers next action will be on Tuesday night when they host the Estevan Bruins at 7:30 while the Mils will be in Weyburn to take on the Red Wings. GX94 will broadcast the game with Yorkton dodge Junior Hockey, pregame 2:50 pxp at 3PM.
Posted by Benny W at 15:11