The Wayway Wolverines got behind early and couldn't complete the comeback as they fell to Virden Oil Capitals 3-2 on Wednesday night from Tundra Oil and Gas Place.

The Oil Capitals would click first as Dylan Cusmano would snipe home his 5th of the season to give them an early 1-0 lead just 6:09 into the 1st. The score would stay like that until the 17:48 mark of the opening frame when Zach Whitecloud would take a nice feed from Cusmano & snipe home his 4th of the year as Virden took a 2-0 advantage into the 1st intermission. Shots after 1 were even at 12-12.

The only offence in the 2nd would come very quickly as Devan Schram would take a nice feed in front from Drake Bodie and snipe home his 16th of the season to give the Oil Caps a 3-0 lead after 40 minutes. Shots after 40 minutes were 27-17 Virden.

In the 3rd, you would expecting a tired and exhausted Wolverine bunch who played 2 players short to start with, then lost Cody Durdle to a fight and Dylan Tanner was injured in the 3rd but the Wolverines were not tired one bit. The Wolverines were the better team in the final frame and scored 2 goals late, a power play goal from Riley Shamray and then Landyn Cochrane would pull the Wolverines within one with a minute to go but that's as close as Wayway would get, losing 3-2 eventual to the Virden Oil Capitals.

Patrick Zubick got his 7th victory in goal stopping 29 of 31 shots for Virden while Troy Martyiuk was impressive keeping his Wolverine team in it but in a losing cause making 33 saves.

The Melville Millionaires gave up a 4-2 3rd period lead as they dropped a 5-4 shootout decision to the Flin Flon Bombers on Wednesday night.

Dylan Ostertag led that 4 goal 2nd period offensively for the Mils with 2 goals while Dalton Menke and Liam Shaw had the other Mils' markers. Tyler Kreklewich who scored the only Mils goal in the shootout, chipped in with 3 assists in the loss.

Brandon Wells made his 2nd straight start and in the shootout loss made 33 saves on 37 shots.

The Mils with the point are now 9 points back of Yorkton for the final playoff spot and their next action will be on Friday night host those Terriers at the Horizon Credit Union Center. Pregame 7:20, pxp at 7:30 with Yorkton Dodge Junior Hockey on GX94.

** In WHL action on Thursday, 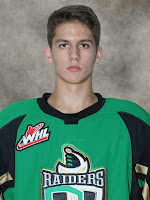 The Prince Albert Raiders fell on the road in Western Hockey League to the Moose Jaw Warriors 4-2 but it was big night for a local product.

15 year old Yorkton native Carson Miller (pictured above) made his WHL debut for the Raiders after being selected by the team in the 1st round of last June's draft.

Miller along with fellow 1st rounder Cole Fonstad combined for the Raiders' first goal as Miller would go top shelf for his 1st WHL goal.

Miller in his rookie season with Yorkton Rawtech Maulers and has 15 goals & 28 points in 36 games this season.

Speaking of the Maulers (SMAAAHL), they lost their 3rd straight shootout decision on Wednesday, 4-3 to the visiting the Notre Dame Hounds. Maulers still sit in 2nd place in the overall standings, one point back of the first place Regina Pat Canadians.