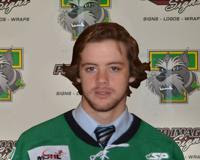 The Terriers are now back to back MJHL Turnbull Cup champions after a 5-1 victory over the Steinbach Pistons on Tuesday night to win the Best of 7 championship series, 4 games to 1.

MJHL goalie of the year Nathan Park was once again solid making 20 saves on 21 shots.

The Terriers will open up the WCC on Sat. April 30th when they take on the champions from the Saskatchewan Junior Hockey League.
Posted by Benny W at 07:50