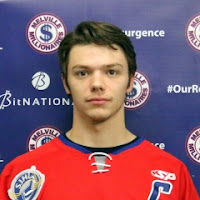 The Mils would strike early just 1:39 into the 1st period as Shane Sherban would take a nice feed in front from Dayton Heino and snap home his 7th of the season to give Melville a 1-0 lead after 1 period. Shots were 7-5 Millionaires.

After a scoreless 2nd period, the Red Wings would continue to push for that equalizer and it would finally come with just over a minute to go in regulation. Mike Eskra would send a low-point shot and big Tyran Brown would pick up the rebound and jam in his 10th goal of the season to tie it up at 1-1 and send it to the overtime period.

In overtime, the Red Wings would control much of the play but it would be the Mils getting the winner in the final seconds. Clayton Eisler (pictured above) would work it up ice and send it on net from the left-hand boards and would beat Arik Weersink for his 10th marker of the season to give the Mils the extra point.

Brandon Wells in his first game back in a Mils jersey, stopped 29 of 30 shots to get the win while Arik Weersink turned aside 22 shots in the loss.

The Mils will wrap up their pre-Christmas schedule this weekend with a home and home series with the Estevan Bruins starting on Friday at Affinity Place.

At the MJHL Showcase in Winnipeg,

The Swan Valley Stampeders drop their showcase finale on Wednesday night, 4-2 to the Selkirk Steelers.

Keaton Jameson and Quinton Sudom scored for the Stamps while Brett Evans made 35 saves in the loss.

The Stamps and Selkirk will meet once again on Friday night from the Centennial Arena in Swan River. Puck drop at 7:30