The line of Navrot, Mann & Jameson explode for 11 points in big win over Dauphin on Tuesday night 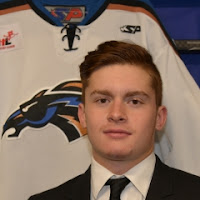 The Stamps would get off to a quick start as just 25 seconds in, Trevar Mann would be left alone in front and jam home his 9th of the season to make it 1-0 Swan. They would add to their lead just 2:16 later on the power play, as from below the line, Connor Navrot would bank one in off a Kings defenceman in front for his 4th to make it an early 2-0 lead. The Kings would be able to cut their deficit in half as Thomas Hansell received a nice pass from Mason Fischer and bury his 9th of the year to make it 2-1. But with 5:33 to go in the 1st period, the Stampeders would regain their 2 goal lead as Daylin Smallchild would walk in from the right point and let out a hard slap-shot that would beat Justin Anderson over the right pad for his 2nd to give his team a 3-1 advantage after 1 period. Shots 13-12 Dauphin after 20 minutes.

The visitors would add to their lead 4:47 into the middle frame as Connor Navrot (pictured above) would rip home his 2nd of the night past Anderson to make it a 4-1 Stamps lead. Riley Shamray would bring the Kings to once again within 2 with his 7th making it 4-2. Swan Valley would add 2 more late goals, 1:51 apart late in the 2nd off the sticks of Trevar Mann and Shane Roulette to give the road team a 6-2 lead after 40 minutes and that's where it would end off after a scoreless 3rd period.

Ethan Peterson earned his 2nd win of the season making 33 saves in the Stamps' net while Justin Anderson turned aside 43 shots in the losing cause.

The two teams will meet tonight (Wed)  in Swan River for the final pre-Christmas break game for both teams. GX94 will broadcast the game with Yorkton Dodge Junior Hockey, pregame 7:20 pxp at 7:30.

(Don’t forget to enter in for the Stampeders Penalty Kill contest during tonight’s broadcast for chance to win $40 gift certificate to Y Not Johnny’s. Call 1-306-783-8622 between 5:00PM-7:20PM to enter in your name to become a contestant


The Swan Valley Stampeders are excited to announce that defensemen Taylor Derynck has committed to Marian College in Wisconsin. Dernyck will be joining the NCAA Division III Sabres hockey program next season. https://www.marianuniversity.edu/
The 20 year old Whistler BC native has played in 194 games in his Junior career. He has suited up for the Alberni Valley Bulldogs (BCHL), OCN Blizzard (MJHL), Kindersley Klippers (SJHL) and The Swan Valley Stampeders (MJHL).
Over the coarse of his junior career Derynck has scored 12 goals and added 38 assists.
We are excited to add Taylor to the Marian Hockey Family. We have had our eye on Taylor since he began his career with Alberni in the BCHL. Taylor’s leadership, skating ability, and skill on special teams will be a great addition to our program. Coach Berger and myself look forward to watching Taylor patrol the blue line for years to come,” said Zach Gaynor
Head Coach of the Marian Sabres.
“Im excited that I selected Marian College because it’s fits me best, both academically and from a hockey stand point, I will also be playing with a former teammate from Alberni,” Said Derynck. Taylor said that it feels awesome to be apart of a great college that treats you like family and is excited about touring the college in early 2018.
Head Coach and GM Taurean White has created at positive atmosphere in Swan Valley. One that allows his players to be focused and committed to doing what ever it takes to make it to the next level.
The entire Stampeder organization would like to congratulate Taylor on his recent commitment to Marian College in Wisconsin.