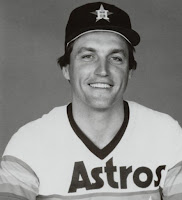 It's been a honor he's been waiting for, for awhile but Melville-born Terry Puhl will soon be able to call himself a Houston Astros Hall of Famer.
The franchise announced Thursday that Puhl will be one of the inductees into the Hall, with ceremony happening this August 13th.

"It's an extremely incredible to be recognized, it's something I've admittedly waited quite awhile for and honestly I got quite emotional when I got the call and I don't get emotional," Puhl said in a phone interview from Houston.

His 15-year baseball career began in 1977, playing 14 of those seasons with the Astros with his lifetime numbers being a .280 batting average, with 62 home runs and 435 RBI’s

But the 65 year old's career started a number of years back in Saskatchewan.

"There was a number of hard-work men that set up a great structure in Melville that allowed a lot of us around my age to get the opportunity to play at a high-level where we had some great success in a National championship with Melville in 1973 that vaulted my career.."

Nowadays, Puhl is in 16th season as the Head Coach of the University of Houston-Victoria baseball team, but even though he calls the Houston-area his now Adult home he's still proud to call Melville his hometown.

"Melville is where it started for me, it's where I grew up and started in the game, I still have a lot of friends in the area and I always look forward to my trips back to Saskatchewan."