Terriers ride the Express to the WCC Playoffs 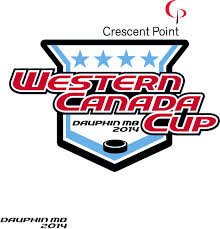 The Yorkton Terriers punched their ticket into the WCC Playoffs with a 4-1 win over the BCHL Champion Coquitlam Express.

The Terriers would continue their dominate play in the 2nd period, having a flurry of chances the way of Express net and they would finally break through as Tayler Thompson would redirect home his 1st goal of the tournament to make it an early 1-0 Terrier lead. But not even a minute later Joey Santucci would send a shot from the side boards that eluded Kale Thomson and hit the back of the net for his 1st of the WCC to tie it up at 1-1. Then just under 7 minutes later the Terriers would get a man advantage and it would be Brett Boehm receiving a nice feed back door from Brady Norrish and it would tap home his 5th of the tournament to give the Terriers a 2-1 lead after 40 minutes, with Yorkton with a huge advantage in the shot column at 29-17.

In the 3rd with the Terriers looking to hold on, would go up 2 goals as Dylan Johnson would step across the blueline and snap home his 1st to give the Terriers that 2 goal lead at 3-1. Yorkton would get one more for good measure with 34 seconds remaining as Chase Norrish would go bar down on Drefiel for his 1st of the tournament to make it a 4-1 Terrier final.

Kale Thomson was once again his solid self in the Terriers goal stopping 24 shots for the win, while Gordie Defiel was outstanding in a losing cause turning aside 40.

The Terriers end off the round robin with a 2-2 record and will await tomorrows (Thurs) results and could still finish as high as 2nd in the standings.

Thursday will be final day of the round robin and it'll feature a battle to stay alive in the WCC as the Spruce Grove Saints battle the Winnipeg Blues in the early game at 2pm MB time, while a battle for a spot in the 1 vs. 2 game is on the line as the host Dauphin Kings battle the 2-1 Coquitlam Express.