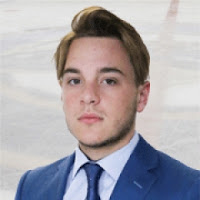 The Swan Valley Stampeders' used a 4 goal third en route to a 5-0 victory over the Waywayseecappo Wolverines.

After a scoreless 1st period, Tommy Cardinal hammered home one by Wolverine starter Liam Tereposky to give his team a 1-0 lead after 40 minutes.

In the 3rd, Carter Cockburn gave Swan a 2-0 lead just 9 seconds into the period shoving the rebound past Tereposky.

Trevor Schroder, Nathan Carl and Ryley Lanthier would add three more the Stampeders' to pace them  to the victory.

Mikael Foucher (pictured above) turned aside 32 shots to get the shutout for Swan while Wolverines' G Liam Tereposky made 31 saves in the loss.

The Stamps' now hold a one game to none series lead and will visit the Waywayseecappo for Game 2 of their Best of 7 MJHL Quarter-Final on Monday night at 7:30.

Chantz Petruic had the lone goal for the Terriers while Matthew Pesenti made 29 saves on 35 shots in the loss.

Kevin Fillier, Grant Longtin, Jake Gudjonson, Holden Knights, Daylen Mannon and Ben Manson all scored for the Wolves who got a 28 save win from Xavier Cannon.

The two teams will meet in Game 2 of the Best of 7 series on Saturday at the FAA. GX94 will broadcast the game with the pregame show kicking off at 7:20 and the play by play starting at 7:30.