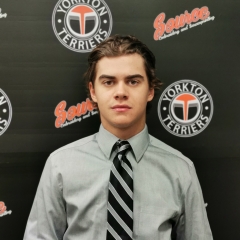 The Yorkton Hyundai Terriers evened up their Quarter-Final series at 1-1 after a 4-3 victory over the La Ronge Ice Wolves in Game #2 at the Farrell Agencies Arena.

For the 2nd straight night, the Ice Wolves scored first as Daylon Mannon walked in from the slot and went bar-down on Matthew Pesenti for his second of the series to make it 1-0 just 6:57 in.

The Terriers would respond though just under 3 minutes later as after Keenan Taphorn shot was stopped, the rebound came out to his brother Kaeden who put it in over Ice Wolves G Xavier Cannon for his first of the series to tie it up at 1-1 after 20 minutes.

La Ronge grabbed their one goal lead back, 3:46 into the second as after a mad scramble in front it would be Chad McIllwain chipping it for his 1st of the series making it 2-1.

But once again the Terriers responded as SJHL MVP and Player of the Year Chantz Petruic's one timer went right through the Ice Wolf goalie for his 2nd of the series tying it up at 2's after 2 periods.

The Ice Wolves once again would go in front by a goal just under 9 minutes into the third when Grant Longtin deflected home a James Philpott point shot by Matthew Pesenti to make it 3-2.

But for the third time on the night, the Terriers even it up at 3-3 as Chantz Petruic whistled it by Cannon for his 2nd of the night.

Then with 2:54 left in the 3rd period the home side would get the winner as Petruic slid it across to Alec Zawatsky for the game winner over the shoulder of the Ice Wolves net minder to give the Terriers the win.

Matthew Pesenti made 26 stops to get the win for Yorkton while Xavier Cannon of the Ice Wolves he made 32 saves in the loss.

The Best of 7 series now shifts back tied at 1-1 to La Ronge for Games 3 and 4 on Tuesday & Wednesday respectively. GX94 will broadcast the games with the pregame shows starting at 7:20, with the play by play starting 7:30