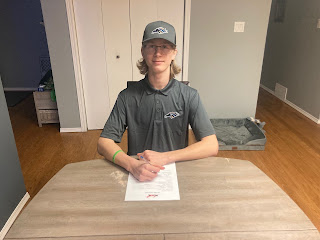 The MJHL's  Swan Valley Stampeders are excited to announce that 2004-born  forward Alexander Kaczorowski has signed a letter of intent with the Stampeders.
The Stonewall, Manitoba played for the Interlake U18 AAA Lightning this past season putting up 17 goals and 20 assists for 37 points in 38 games played.

Stampeder Head Coach/General Manager Barry Wolff says "Alex is a great person and player, who we hope will contribute to the line up right away."

Kaczorowski was selected in the 4th round, 43rd overall in 2019 MJHL Draft. 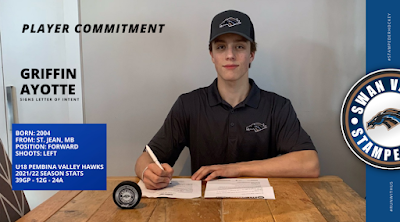 The Swan Valley Stampeders of the Manitoba Junior Hockey League are proud to announce that 2004-born Forward Griffin Ayotte has signed a letter of intent with the Stampeders.

Ayotte from St. Jean, MB played for the U18 Pembina Valley Hawks this past season scoring 12 goals, adding 24 assists for 36 points in 39 games played.

“Griffin is a great leader, as our team captain, he promoted work ethic, positivity, and that next shift mentality, a great communicator, best of all, he brings that humility that great leaders possess,” said Hawks Head Coach Matt Victor. “Griffin’s speed and edgework are on another level, he can play up and down the line-up, and played in all situations, taking key face offs. The more ice time you gave him, the more he excelled. I am excited to see what the future holds for Griff, the Stampeders are getting a good one.”

“We are excited to have Griffin sign a letter of Intent,” added Stampeder Head Coach and General Manager Barry Wolff. “He is a great person, a leader and a solid 2-way player that we hope can contribute right away.

The Stampeders welcome Griffin Ayotte and his family to the Stampeder organization.