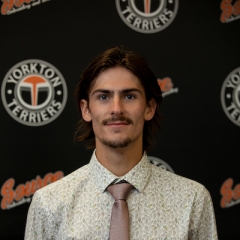 The Yorkton Terriers are pleased to announce that 20 year-old defenseman Tyson Janzen has committed to play for the  Red Deer Polytechnic Kings, who play in the Alberta Colleges Athletic Conference (ACAC) for the 2022-23 season

He will join teammate Tanner Sklaruk, who also committed this past week to Red Deer Polytechnic.

Tyson is from Saskatoon, Saskatchewan and is a 4th year veteran defenceman with the Terriers.

Tyson has been an impact defenseman for the Terriers since signing with the junior club as a 17 year old, while also being a tremendous leader on and off the ice. Tyson is having a career year in his 20 year old season, putting up 31 points in 54 games, while also serving as an assistant captain.

He finishes off a very successful career with 61 points in 158 regular season games played with the Terriers.