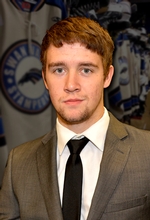 The Swan Valley Stampeders put together a pretty sound effort on Tuesday night as they won their 4th straight game and 18th overall blanking the Virden Oil Capitals 1-0 at Tundra Oil and Gas Place.

In a first period which was a pretty solid and simple opening frame from the Stampeders and they would get the only goal as Josh Tripp would use some good hand-eye coordination to deflect home a Jordie Valentino point shot for his team leading 18th goal of the season to give Swan a 1-0 lead after 1 period. Shots were even at 8-8.

After a scoreless 2nd period, the 3rd would have some close calls but both sides would not able to get anything going offensively as it would end in a 1-0 Stamp victory.

20 year old Zach Degraves (pictured above) was very sharp in the Stamps goal stopping all 26 shots he faced for his 2nd shutout of the season while Oil Cap net minder Sean Keuhn was also sharp making 23 saves in the loss.

The Stamps look to keep the streak alive on Friday night when they host the Selkirk Steelers at 7:30 from the Centennial Arena in Swan River.

Also in the MJHL our other local team wasn't as fortunate on Tuesday.

The Waywayseecappo Wolverines fell in their 3rd straight game, a 9-3 decision to the Dauphin Kings.

Both goaltenders were facing their former teams for the first time and Kings goalie Brandon Holtby made 35 saves in the win while former King Troy Martyniuk wasn't as fortunate as he let in 7 goals on 36 shots in the Wayway net.

The next action for the Wolverines will be on Saturday night when they host the Selkirk Steelers at 7:30 from the Wayway Arena Complex.

Over in the SJHL,

The Yorkton Terriers get a point on home ice tonight (Tues) but they fall in the shootout to the defending SJHL champion Melfort Mustangs 3-2 at the Farrell Agencies Arena.

Corwin Stevey and Brandon Sookro scored for the Terriers while Matt Kustra 34 saves in the loss.

The Terriers will wrap up their 3 game homestead on Thursday night at 7:30 when they host the Kindersley Klippers at the FAA.
Posted by Benny W at 20:43