The Swan Valley Stampeders losing streak dropped to 3 games, as they dropped a 4-2 game on Tuesday night to the Dauphin Kings in MJHL action.

In the first it would be the home team the Kings getting the only goal on a nice individual effort by Keaton Leininger as he would walk around a couple of Stampeders and then snap it by goaltender Brett Evans for his 10th of the season to give the Kings a 1-0 lead after 1 period. Shots 15-12 Dauphin.

There would be some good chances from both sides in the 2nd, but once again it would be the Kings getting the only goal as Leininger would add his 2nd of the night, this time on the PP for his 11th to give his team 2 goal lead, at 2-0 after 40 minutes.

Tyler Garrioch would increase their lead as he would capitalize on a Stamps turnover shorthanded and beat Evans to make it a 3-0 game. But Michael Fortin would take a nice feed from Colton Brausen on a 2 on 1, and direct it by Brandon Holtby for his 9th of the season to cut Swan within 2 at 3-1. But once again it would be Leininger completing his Hat Trick and his 12th of the season to make it 4-1 Kings. The Stamps would get one more but thats as close as they would get as Fortin would add his 2nd of the game but it would end up a 4-2 Kings victory.

Brandon Holtby made 32 saves in the win for the Kings while Grandview MB product Brett Evans made 27 saves in the losing cause.

The Stamps continue their road stretch on Friday night when they visit the Winkler Flyers at 7:30. 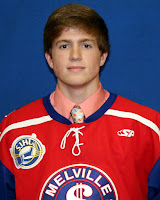 19 year old Cole Filler (pictured above) had 2 goals to lead the Melville Millionaires won their 3rd straight by doubling up the Humboldt Broncos 2-1 on Tuesday night.

Brandon Wells made 26 saves in net for the Mils.

The Millionaires next action will be on Sunday night at 6PM when they host the Kindersley Klippers from the Horizon Credit Union Center. 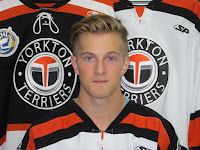 The Yorkton Terriers remained 4 points clear of the Mils, 1 point ahead of the Broncos as they doubled up the Viterra division Weyburn Red Wings.

After getting down 2-0, the Terriers scored 4 unanswered goals by Tyler Baier, Adam Santoro, Dexter Robinson (pictured above), and Jordan Evans.

Local product Matt Kustra made 32 saves for the Terriers.

The Terriers return to home ice on Saturday when they welcome once again the Kindersley Klippers at 7:30.
Posted by Benny W at 20:29