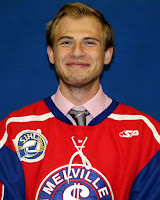 The Melville Millionaires got their 1st win since trading away 3 20 year old veterans by beating the Kindersley Klippers 3-1 on Saturday night.

Christian Stevens (pictured above) scored his 16th and 17th goals of the season while Tyler Kreklewich also scored for the Mils.

Clarke Flegel was 3 seconds away from his 1st SJHL shutout, before it was broken but sill was very impressive making 31 saves for the win.

The Mils will take on those very same Kindersley Klippers in their next action on Friday night on home ice. GX94 will broadcast the game with Yorkton Dodge Junior Hockey, pregame 7:20 pxp at 7:30 from the Horizon Credit Union Center.

The Yorkton Terriers got goals from Corwin Stevely and Jordan Ross but they fell on home ice, 4-2 to the Weyburn Red Wings at the Farrell Agencies Arena.

Jakob Severson made 25 saves in the losing cause. Terriers outshot the Wings, 42-29 but 20 year old Jack Burgart made 40 saves in the Weyburn goal.

The Terriers' next action will be on Tuesday night when they host the Melfort Mustangs at 7:30 from the Farrell Agencies Arena.